Eve of Destruction composer is gone

P.F. Sloan, who wrote Barry McGuire’s ‘Eve of Destruction’, has died of pancreatic cancer at 70.

Born Philip Schlein, he also composed the hook to ‘California Dreamin’ and ‘Secret Agent Man’ for Jonny Rivers.But Eve of Destruction, with its Dylanesque foreboding, has never lost relevance in half a century. 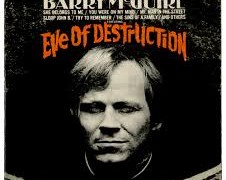