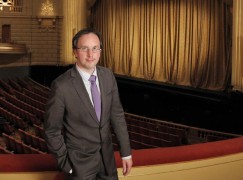 From an Opera News interview with Matthew Shilvock:

My first opera was at age thirteen, I think. It was one of Graham Vick’s Birmingham Opera productions, which was a contemporary Beauty and the Beast opera, but it was done in a very immersive way, as Graham does so well.

I grew up with Welsh National Opera, which they would tour to Birmingham, in that wonderful system that England has. By the time I got to Oxford, I had developed a real passion for opera. And while I was at Oxford, I developed a passion for arts administration—I felt that was a very noble pursuit to be going into, and one that energized me. It was an almost masochistic desire to solve the most complicated jigsaw puzzle possible—all of these pieces that have to come together perfectly for the curtain to go up and the show to go on.