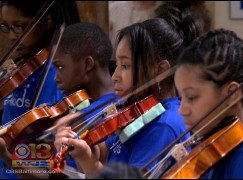 Discovering the social limits of classical music – and El Sistema

In the new issue of Standpoint, I take a drive on the wild side to assess whether classical music can do much to address  a city’s social crisis. In other words, to see where the universal El Sistema remedy hits a brick wall. 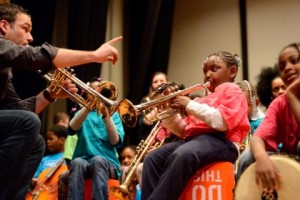 The school, as we arrive, is in lockdown. Lockdown? “It’s what we do when there’s been a shooting,” says the young man who eventually lets us in. “Today, it’s just a practice drill.”

The last shooting was two weeks before, a drive-by burst that wounded five parents as they waited to collect their kids. No arrests were made. The police in Baltimore are themselves in lockdown since the death of an unarmed suspect. The city, briefly the nation’s capital after the British burned down Washington in 1812, is a tinderbox of racial tensions, a gaping black hole in the American dream.

I’m in West Baltimore, ten minutes’ drive from the Washington Memorial, and 40 from Barack Obama’s White House. It’s late afternoon. The streets are deserted, most houses derelict, barely a soul to be seen. The school I’m visiting is built like a high-security prison, with massive gangways for crowd control, neon lighting and steel shutters. It is after school hours and the students who have stayed behind, which is most of them, are playing stringed instruments or singing in a choir.

If your first language is Chinese, you can read an authorised translation of the essay here.

« Working with the demanding Luc Bondy: a memory

Munich does U-turn and calls for new concert hall »