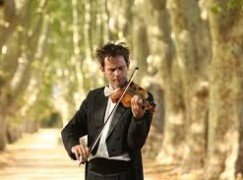 Concertmaster falls off stage in mid-concerto

We are receiving reports that James Cuddeford, concertmaster of the Hong Kong Sinfonietta, collapsed tonight during a performance of the Schumann cello concerto and was taken to hospital.

James, an Australian who has led the orchestra since 2010, is said to have been ill during the day and vomited several times, but he turned out nonetheless for the performance, with soloist Aurélien Pascal and conductor Christoph Poppen.

Between the second and third movements of the Schumann he appears to have felt unwell and tried to leave the stage. But as he rose from his seat he fell off the stage with his violin.

He is reported to be stable in hospital.

We wish James a swift recovery.