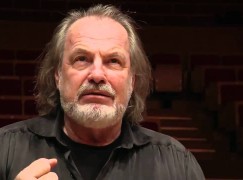 China names its Conductor of the Year

Not an obvious choice.

Gustav Kuhn’s 24-hour version of Wagner’s Ring in Shanghai, borrowed from the Tyrol Festival, won a 40-minute ovation from a huge audience that managed to stay awake. Kuhn, 70, has also conducted Parsifal and Meistersinger in China in the past couple of years.

Yu Long, director of the Beijing Music Festival, said on presenting the award: ‘Kuhn’s name, here in China, will always be spoken in the same breath as Richard Wagner’s.’