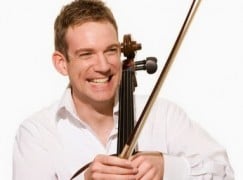 There were disappointed customers at the Royal Festival Hall last night when the soloist, Johannes Moser, failed to show up for the customary meet-and-greet with buyers of his new CD.

One of them wrote to Slipped Disc:

Some thirty concertgoers were left twiddling their thumbs after last night’s otherwise superb RFH concert. It was announced over the tannoy while we were filing out that the soloist, German-Canadian cellist Johannes Moser, would sign copies of his CDs at the usual place.

Purchasers of the CD spent a half hour waiting patiently in an orderly queue before a table set up for the purpose. Then, a highly embarrassed official appeared to apologise profusely that the soloist  had left the building. I actually found out that he had gone to dinner with the conductor (Andrés Orozco-Estrada ) and orchestra manager at an onsite restaurant…

Those ex-fans won’t be coming back any time soon.

UPDATE: Alerted by Slipped Disc, Johannes issued a fulsome apology before the day was out.

« A chosen Messiaen disciple has died

Stranded in America, a violinist gives thanks to his friends »