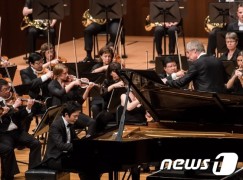 There’s a huge media storm brewing in Korea and China over Yundi Li, who broke down in Seoul during the first movement of a Chopin concerto.

Here’s how it sounded:

And here’s what’s raging on social media, with fans demanding their money back. More here in English-language Korean media, which claims that ‘It was not only Yundi’s mistakes that the audience couldn’t seem to shake, but rather his attitude toward conductor David Robertson during the orchestra’s sudden pause, in which the pianist appeared to shift the blame for his tempo mistakes onto the maestro.’

And here‘s a summary from Chinese media (in English)

Early eyewitness reports from Korea, on which our original post was based, have now proved to be over-excited and we have toned down the post accordingly. But that’s the risk with Yundi, who generates intense interest.

We performed this concerto the previous day in Daegu. The performance went smoothly and was greeted rapturously by the audience who were clearly fans of his. The next day, in Seoul, he simply took a wrong turn and our harmonic progressions parted company (there is little else for an orchestra to do accompanying a Chopin concerto!). He tried to find his way back in, but in a piece such as this – where the soloist carries 90% of the musical argument – I can fully understand how difficult it is to find your way back into the middle of a long paragraph. He tried heading for the exit (musically speaking) by playing a couple of cadential bars prior to what he hoped was the next tutti.. But found the wrong tutti. You can hear my colleague Dene Olding valiantly come in with the next tutti entrance (from memory – we had a page or two to go) but that wasn’t the key our soloist had reached (he, I think, had found the very end of the movement, whilst we were still in the development). Thus things came to a stand still – without any say so or interference from our conductor – and Yundi bravely decided to try it all over again, this time with success. We finished the performance and the applause was generous and supportive. He declined to play an encore, but he had declined the previous day too.
He did not leave the stage until the end, and I am unaware of any blame being laid at anyone else.
It is a shame that this is the only bit of the concert available to hear – I cannot imagine that this is a legal recording. It has clearly been made available through schadenfreude alone.

« The sister who was airbrushed out of Sibelius’s life

Want to sing with Kirill? »