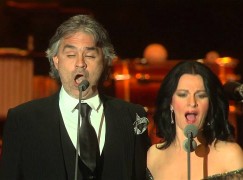 The Romanian soprano has launched an appeal for victims of the Bucharest nightclub fire. Among its first supporters is the mass-market Italian tenor, Andrea Bocelli, who sent this message:

I was in the United States, when I heard about the terrible misfortune that has destroyed so many young lives in Bucharest.

That day, I thought about your country, that I love, I visited and which I feel emotionally close, thinking about how much suffering, how much despair had caused this tragedy, involving many families, throwing them in anguish, not denying that, for a moment, my faith threatened to falter. Because in times like these it is so easy to feel disoriented, while searching for a plausible explanation as to why the sky would allow to leave so many young lives without a future.

The existence often puts us dramatically on contradictory aims, and it is heartbreaking to have to admit that the mind of men is not made to understand the logic of God … But He – as a priest told me, a dear friend of mine – has an eternity to make amends, and the time on earth (and any pain it marks the way), is drastically reduced, when compared to perpetual life.

No wonder that a heart as big as that of my dear friend Angela Gheorghiu, has reacted immediately… Unfortunately I can not be physically present at the Romanian Atheneum, but I will be with my heart with you, and pray with you, and I wish to send to the families touched by this tragic event and to all the people of my beloved Romania, my closeness and my most affectionate embrace. ”

Angela invites everybody to join her efforts to raise funds for all the victims of the fire from Club Colectiv in Bucharest. The collection and distribution of funds are made by Fundatia Pretuieste Viata, led by Andreea Marin.
INTERNATIONAL DONATIONS can be made into the following account:

Just in: Star pianist joins board of the New York Philharmonic »