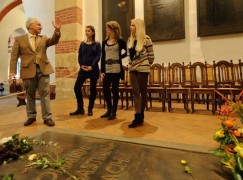 Elizabeth Braw reports from Leipzig that auditions have begun for the post of Cantor at St Thomas’s Church.

This week begins the auditions of four finalists from a pool of 41 applicants. The candidates are Markus Teutschbein, 44, who currently conducts the boys’ choir in Basel, Switzerland; Clemens Flämig, 39, who conducts the city choir in the city of Halle, near Leipzig; Markus Johannes Langer, 44, who leads the music at a church in the northern German city of Rostock and conducts a concert choir in the city; and Matthias Jung, 51, who conducts the Dresden Boys’ Choir as well as an adult concert choir. Each one has a week to sell himself in the job.

“It’s an immense pressure,” admitted Stefan Altner, a member of the search committee. “If we don’t find the right candidate among the finalists, we’ll start over again.”

We’ll try to keep you posted on the outcome.

Lufthansa’s on strike. The airline, not the orchestra. »