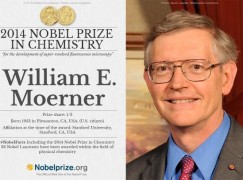 You may recall the joy that Thomas Südhof spread when, on winning the 2013 Nobel Prize for medicine/physiology in 2013, he said he owed it all to his bassoon teacher.

Südhof, a passionate bassoonist, went on to relate precisely what he had applied from music to his work in science.

Now, the indomitable editors of The Double Reed, have discovered another bassoon player with a Nobel Prize.

Like Südhof, Moerner teaches at Stanford University. He plays several instruments, including bassoon, and believes that making music is often a prerequisite to breaking down barriers in science. He tells Ryan D. Romine:

A number of my best students (maybe 50%) have strong music skills, something we enjoy during our annual holiday parties. Certainly arts training is a necessary part of a broad education, because we all need to appreciate the arts to see the variety of ways in which our emotions can be expressed.

Moerner goes on to say:

My musical experiences have always tapped into a deep part of my soul in a very personal way. I enjoy the harmonies, the intricacies, and the intellectual challenge, which all probably connect to the rules and structure of science and mathematics, but I also have an emotional connection to music. I met my wife as my partner in Gilbert and Sullivan’s Gondoliers, and her parents were co-founders of the Gilbert and Sullivan Society of San Jose! These days, I only have time to rehearse once a week to sing in the Stanford Symphonic Chorus or to do some summer sing-alongs, but this is still very fulfilling.

Read Ryan’s full, fascinating interview about music and chemistry – laboratory and personal – in this month’s edition of The Double Reed.

« In the tense centre of Brussels, a cellist plays Hallelujah