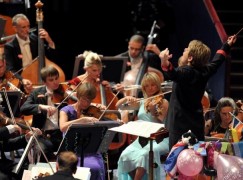 The Andrew W. Mellon Foundation has given Dallas Opera half a million dollars to support its training program for conductors of the under-promoted gender.

‘This innovative program is designed to support the career aspirations and advancement of women conductors in the field of opera, while addressing the thorny problems resulting from ingrained gender inequality at the top of the profession.‘ More from the press release below.

The inaugural institute is scheduled to take place in Dallas from November 28th through December 6, 2015 with participants (six institute fellows, four additional US observers) selected from more than 100 qualified applicants originating in 27 countries around the globe.  There is no comparable program today for addressing the needs of talented young female conductors seeking to make their mark on the world’s top opera organizations.

Although “Level One” opera companies in North America (as defined by OPERA America) produce approximately a hundred different opera productions each year, women conductors will stand at the podium for only around 5% of the total number of productions during the 2015-2016 Season.

The situation is equally dire in the symphonic world: of the top symphony orchestras in the U.S., only one is led by a female music director (the Baltimore Symphony’s Marin Alsop, pictured).

Recent trends indicate the gender gap may, in fact, be widening.  Data from the National Center for Education Statistics show that over the past decade, 44% of Masters Degrees and 30% of all doctorates in conducting went to women.  Nevertheless, a mere dozen female conductors are positioned to lead the top 103 high-budget orchestras on this continent (League of American Orchestras report, 2013).  “To some extent,” opined The Independent (U.K.) in 2010, “the scarcity of female conductors is a vicious circle.  With so few women…in high-profile posts, the role models have not existed to inspire more, so the situation becomes self-perpetuating.”

La Marsellaise as it ought to be sung »