Yundi is back on Chopin jury

Slipped Disc’s scout at the Chopin Competition reports that after a five-day absence to attend a friend’s wedding in Shanghai, Yundi Li clocked in this morning to resume his jury service in Warsaw.

He’ll need a good night’s sleep to overcome jetlag and the wedding hangover. 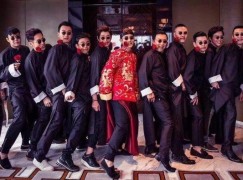