Watch: When Celibidache returned to Berlin

The Philharmonic has posted rehearsal video of the interim conductor they kicked out in 1952 and welcomed back 40 years later. Celi lets the violins have it full volume….. 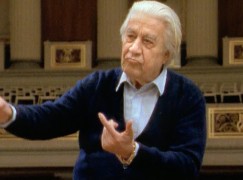