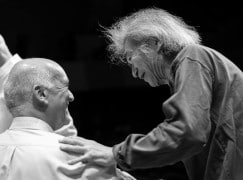 Recuperating from cancer Seiji Ozawa, 80, tried his hand at an overture with the Vienna Philharmonic in Tokyo. From the Asahi Shimbun:

By JUNKO YOSHIDA/ Senior Staff Writer
Maestro Seiji Ozawa led the Vienna Philharmonic Orchestra as a guest conductor after being feted with a special birthday performance during an open rehearsal on Oct. 4 at Tokyo’s Suntory Hall.

Conductor Christoph Eschenbach and the orchestra, both of whom are in Japan to give performances, played a birthday song based on the works of Beethoven and Bernstein for Ozawa, who turned 80 on Sept. 1.

During the free event, Ozawa took the conductor’s podium in red sneakers and led the orchestra in a performance of Beethoven’s “Egmont” Overture.

“We knew what both sides wanted to do the moment they played the first note,” Ozawa said after the performance. “I am totally overwhelmed. I was reminded that they are not your average orchestra.”