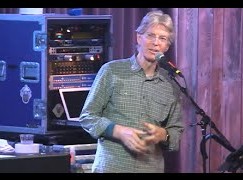 Almost 25 years ago I broke the story of a rock legend who had developed a passion for esoteric contemporary music, most of it by British composers. More than that, Phil Lesh of the Grateful Dead put his money where his heart was.

He sent money to composers and their widows to help get their music recorded. Havergal Brian, Harrison Birtwistle and Robert Simpson were three early beneficiaries.

Phil was modest and unassuming when I tracked him down. He just loved modern music.

I was very sorry to read today that he is suffering from bladder cancer and send him all good wishes. Phil, 75, has cancelled some gigs but says the tumours are non-aggressive and the prognosis is good.

My original exclusive story was published in the Independent, Der Standard, the Los Angeles Times and various other newspapers around the world. You can read it here.

Menahem Pressler: ‘I’m here tonight thanks to a brave surgeon’ »