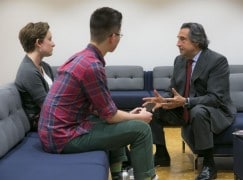 Riccardo Muti: ‘A conductor who moves more than is necessary … you have to boo’

From an interview with the Chicago Maroon, a student newspaper:

Riccardo Muti: ‘In the last [several] years, we have become a visual society. So instead of listening to the music, we want to see conductors exercising on the podium, pianists that communicate with God while playing, violinists that try to impress the public with sexy attitudes…All this didn’t exist 30 years ago, 40 years ago. Today, with television and other things, people are interested in what they see. Nobody speaks about the spiritual integrity of these [artists]; what they are conveying to the public.

‘So something dramatic is happening. And instead of helping the public to become more concentrated on the substance of what art is, we are following them—giving them candies instead of vitamins. The next time you go to a concert and see a conductor who moves more than is necessary, and opens his mouth like a shark, you have to boo.’

« Maestro in agony dash to hospital 90 minutes before concert