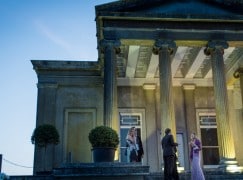 It has been known for a while that Wasfi Kani’s Grange Park Opera was being pushed out of its original location and as looking for a new venue. Today we learn that the Grange Park owners are planning to set up a rival opera company.

Lord Ashburton and his son Mark Baring, owners of the Grange and its park at Northington in Hampshire, today announced that a new company has been formed to continue the annual opera seasons, following the upcoming departure of the existing company after the 2016 Season.

The Grange Festival will have its inaugural season in 2017 in the widely-admired theatre, directed by internationally-acclaimed counter tenor Michael Chance. The annual opera festival will continue to run as now in June and July with programming for 2017 due to begin shortly.  A Board of Trustees is being formed and will be chaired by The Hon. Sir Charles Haddon-Cave.

Since 1998 the Grange Estate has hosted Grange Park Opera (GPO), an independent opera company, at Grange Park and the Baring family had hoped to agree terms to renew their lease. However, 2016 will be the last GPO season at the Estate.

“It has been wonderful to have opera at Grange Park each summer and we are delighted to announce that we will continue to do so. A great deal has been achieved in nearly twenty years, thanks to GPO, co-founders Wasfi Kani and Michael Moody and their staff, and the generosity and commitment of many supporters, donors and visitors.  We look forward to working with The Grange Festival to continue what has become a much-loved cultural event. We are extremely fortunate to have two very talented people to lead and chair the new company and, with the encouragement of many other loyal supporters, we much look forward to 2017 and many years beyond.”

“I am particularly excited about the range of possibilities which this extraordinary venue, and jewel of a theatre, offers. I am confident that more than three decades of treading boards and vocal communication will stand me in good stead for this exhilarating challenge, and I look forward to building on the 18-year operatic legacy at Grange Park, which has been truly remarkable. My first task is to assemble a small experienced management team.”

« A principal cellist tells of her terror of hearing music

Did you see the string quartet at Paris Fashion Week? »