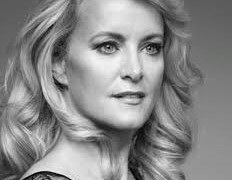 Many people watching TV in bed thought they had died and gone to heaven when a symphony orchestra of 74 musicians, plus chorus, popped up on Stephen Colbert’s Late Show.

When did a real orchestra last fill the screen of network television?

OK, it wasn’t Beethoven. It was The Legend of Zelda: Symphony of the Goddesses, which is on a worldwide tour to promote a Nintendo game. But the symphony is in four movements and the conductor, Amy Andersson, is a serious musician who has led opera productions at the Deutsche Oper am Rhein, National Theater Mannheim and Stadttheater Aachen. Her late-night audience was greater than all the opera houses in America put together.

Amy Andersson is the widow of the late and much-missed conductor, Yakov Kreizberg, who died in March 2011.