She was awarded an honorary doctorate on Friday by the Academy of Music in Katowice.

In response, Martha said it was her greatest award in Poland since winning Chopin competiton in 1965. For someone who has returned loyally to the country many times in 40 years, you might have thought they would have given her some state honour.

After the ceremony, Marthat sat down with Nelson Goerner and played the hell out of the Rachmaninov Symphonic Dances. 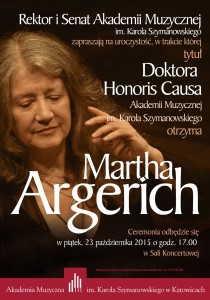