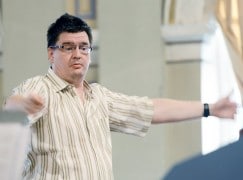 Musicians in Croatia are in mourning for Sasa Britvic, an enterprising conductor whose life is reported to have ended under severe financial pressures.

Making his name as conductor of the Ivan Goran Kovacic Academy choir, Britvic founded the Croatian Baroque Ensemble before going into the music business to become director of the Zagreb Concert Management.

But a 2006 tour cancellation by the Rolling Stones, which he apparently failed to insure, left Britvic facing huge costs and a forthcoming trial.

Britvic was a champion of living composers and a successful opera conductor.