The Court of Appeal in Paris has banned the sale of Dmitri Chernyakov’s 2010 Munich production of Francis Poulenc’s Dialogues des Carmelites.

The cae was brought by the Poulenc and Georges Bernanos heirs, who called the production ‘a betrayal’.

Now the BelAir label has been ordered to remove the video from sale.

So much for freedom of expression. 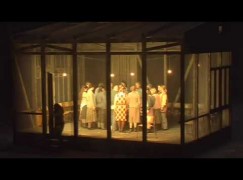