Khatia Buniatishvili is in the Ukrainian capital to raise funds and morale for victims of the Russian war. She has spent the day with soldiers in hospital. 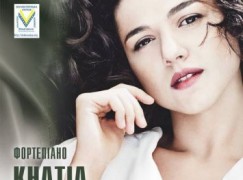