In the Guardian: Israel needs cultural bridges, not boycotts

I’ve made an exception this once because (a) the request came from someone who was in my class at school and (b) I agreed with every word he had written.

So did J K Rowling, Hilary Mantel, Melvyn Bragg and others of greater or lesser celebrity (Rachel Weisz, where are you?).

Here’s the letter (below) and here‘s the Guardian link: 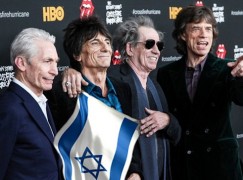 In February 2015 you published a letter from UK artists announcing their intention to culturally boycott Israel.

We do not believe cultural boycotts are acceptable or that the letter you published accurately represents opinion in the cultural world in the UK.

Therefore we are writing to declare our support for the launch and aims of Culture for Coexistence – an independent UK network representing a cross-section from the cultural world.

We will be seeking to inform and encourage dialogue about Israel and the Palestinians in the wider cultural and creative community. While we may not all share the same views on the policies of the Israeli government, we all share a desire for peaceful coexistence.

Cultural boycotts singling out Israel are divisive and discriminatory, and will not further peace. Open dialogue and interaction promote greater understanding and mutual acceptance, and it is through such understanding and acceptance that movement can be made towards a resolution of the conflict.

Ultimately we all believe in a two-state solution so that the national self-determination of both peoples is realised, with the state of Israel and a Palestinian state living side by side in peace and security.