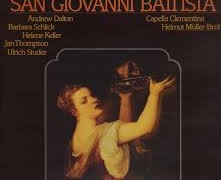 Nicolas Mansfield, director of Holland’s Reisopera, writes exclusively for Slipped Disc about a co-pro he was planning with Gotham Chamber Opera – a production that may never see light of day after Gotham’s sudden closure.

Another opera house shuts down. And although such events are sadly not rare these days, the news struck me hard. The Nederlandse Reisopera had made a brilliant plan with Gotham Chamber Opera.

Alessandro Stradella was stabbed to death at 42, but before that fateful event he was a hugely successful composer . His ‘San Giovanni Battista’ was the perfect opera for our co-production. A relatively unknown work which more than deserved production today. With a reasonably small cast and orchestra it was perfectly suited for performance in churches, industrial spaces and other unusual locations. To my mind this is one of those operas that needs to be freed from the constraints of the classical theatrical environment that we built in later centuries.

I first met artistic director Neal Goren and financial director David Bennett at a conference called APAP, in New York in 2013. The Association of Performing Arts Presenters is best regarded as a global speed date for everyone involved in the performing arts. As usual at these gatherings, the real inspiration is often not to be found at the numerous sessions and lectures, but during chance meetings around coffee tables or at local lunch flirts. Neal and David spoke with me there about their feisty little opera setup in New York. Ambitious and attractive productions in unusual spaces. Literally designed to inspire present day audiences to appreciate the wonderful live art form that opera can be.

Sitting in the shadow of the Metropolitan Opera we discussed the fact that opera should not only be about spending millions on the wealthy, but also about spending love on the rest. Those who haven’t necessarily developed an acquired taste but are open to anything. I remember briefly touching on the tragic demise of New York City Opera, and wondering whether or not this may somehow boost financial support for Gotham.

The Nederlandse Reisopera is an advocate of co-productions. Co-productions are not only about saving money, but also about sharing. Sharing audiences, expertise, employees, artists and even cultures. And above all, about making the world a smaller and better place through opera. That’s basically all we do.

Both Neal and I were interested in the young American director, Timothy Nelson. Timothy resides in Amsterdam and had already directed a few smaller projects for our Resident Artist’s Programme. I had recently decided to trust him with Bizet’s Pearl Fishers. Neal and I, an American director living in the Dutch capital, and two opera companies with similar philosophies. The boxes were ticked and a co-production was born.

Found my coat and grabbed my hat.

Three years had passed since our first discussions. We had agreed on the cast which we would use for the performances both in New York and for the tour in The Netherlands. Timothy Nelson was busy with his concept and here at the Reisopera we were hunting down eccentric and suitable locations throughout the country in which to perform in 2017.

Yesterday’s news about the sudden demise of Gotham Chamber Opera saddened me enormously. It’s these little jewels of opera companies that keep our art form so alive. Gotham Chamber Opera may have been just a drop in the ocean of the opera world, but at the end of the day every opera company, regardless of its size, exists by grace of an art form, and is only as good as its last emotion.

‘And though the holes were rather small

They had to count them all

Now they know how many holes it takes to fill the Albert Hall.’

The Nederlandse Reisopera will search for another co-producing partner, or replace this production. However disappointing, that’s nothing more than a minor inconvenience for us. If these sad events remind us of anything it is that attention to detail in every aspect of our work can be a matter of life and death. Our thoughts right now are with our friends in New York who loved their work and brimmed with pride every time we spoke.

And also, maybe more importantly, with the audiences which now will not be.

Here’s a link to the second act duet “Che gioire, che contento’ in which Salome and Herod sing of the emotions of foreboding and joy at the impending beheading of John the Baptist.