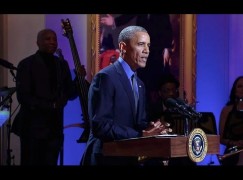 ‘Dear Mr Obama, What you got against classical music?’

Stimulated by a Slipped Disc post yesterday, the Milwaukee conductor Viswa Subbaraman has written to the President, asking why classical music was left out of the White House celebration of American music.

As an Indian American who grew up listening to Dr. Dre, Snoop Dogg, Pearl Jam, Indian Carnatic music, and Garth Brooks but now conducts opera and orchestral music, I wanted to write to you about my sincere disappointment that no American classical musicians were invited to the White House for the Celebration of American Creativity. As someone currently living in the classical music world, I find myself constantly defending rap, hip-hop, country, rock and roll, etc. against the snobbery of some of my peers. I find it unfortunate that one of the oldest art forms, and one that has been material in diplomacy would not get the same focus from the White House.

Wonder if he’ll get a reply. Full letter here.

« A Chicago cellist explains: Why we work only 20 hours a week

Absolutely, the lowest of the low »