Peter Wollny, director of the Bach Archive in Leipzig, has announced that the libretto of the St John Passion, and other Bach works, appears to have been written by a student from Nuremburg.

Apparently the handwriting on the mss correlates to that of Christoph Birkmann (1703-1771), who has several papers lodged in the Nuremberg State Library. Birkmann studied theology and mathematics at the University of Leipzig from 1724-27 and took private lessons with the town cantor before becoming a full-time theologian. 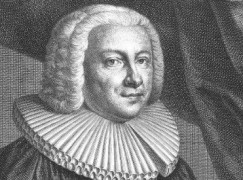