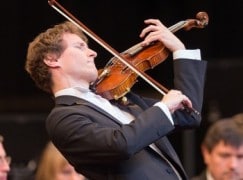 Josef Spacek, concert master of the Czech Philharmonic Orchestra, had his precious 1855 Jean-Baptiste Vuillaume instrument confiscated by Russian customs officers at Koltsovo airport near Yekaterinburg, as he tried to leave the country on Thursday after giving a festival performance.

The Customs men accused Josef of trying to smuggle out the instrument without paying duties.

As of this moment, we do not know if the violin has been returned to its owner. Tass, which reports the story, has put an inflated value on the instrument. The festival has refused to comment. We are waiting to hear more from Josef and the Czech Phil.

Remember: You take precious objects to Russia at your own risk.