An award for crossover composers

The competition takes place in Mannheim every three years.

It was won yesterday by an American,  Benedikt Bryden, a graduate of the Richard Strauss Academy in Munich. Hs winning entry was entitled Schillers Nachtflug, neatly combining German classicism with modern aviation.

Or so it’s reported.

We can’t find any reference online to a composer called Bryden. It may be Benedikt Brydern, who writes like this: 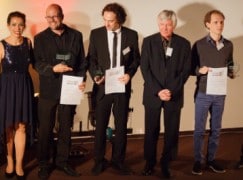