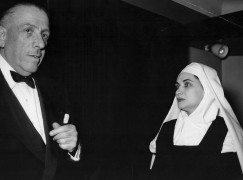 She sang 28 roles at La Scala over 35 years, as well as playing Violetta in Verdi’s La Traviata 648 times around the world.

Virginia Zeani turns 90 today. Friends in West Palm beach, where she lives in retirement, are putting on a concert tonight with soprano Elizabeth Caballero.

Romanian born, Zeani made her professional debut on May 16, 1948 at the Teatro Duse in Bologna as Violetta. She reached La Scala in 1956 as Cleopatra in Handel’s Giulio Cesare opposite the fine Italian bass Nicola Rossi-Lemeni; the cast also included Franco Corelli and Giulietta Simionato.

She had met Rossi-Lemeni earlier in Florence where Tullio Serafin had chosen Zeani to replace Maria Callas as Elvira in I Puritani. Nicola proposed to Virginia at La Scala. Their son, Alessandro, was born a year later. 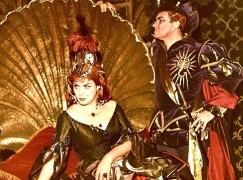 While performing Giulio Cesare, Zeani was also rehearsing for the world premiere of Frances Poulenc’s Dialogues des Carmelites, for which the composer had chosen Zeani to sing the role of Blanche.

A great life in opera.

« Near double-joy for Canada at the Chopin Competition