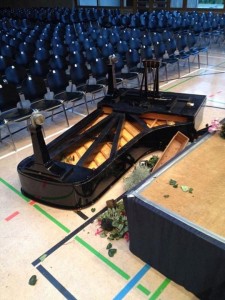 This happened on Saturday, 90 minutes before an orchestral concert in Frickingen, Germany.

Apparently the floor gave way after some recent extension work and the Steinway just flipped over.

But determination and efficiency got the show back on stage. Stefan Vladar went on to play the Brahms B-flat major concerto. Latest reports say the piano lid will have to be replaced, but the mechanism is undamaged.

UPDATE: And here’s why it happened.