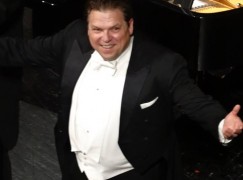 A Canadian tenor tells Canada to lose its cringe

Yesterday, Canada closed an opera company. Ottawa’s Opera Lyra got into trouble in 2011 but staggered on with small gifts and sticky plaster. Yesterday, the cash ran out.

The Canadian-German tenor Michael Schade, who is based in Vienna, has had enough of piecemeal solutions and Canadian self-deprecation. In this passionate appeal, Michael calls on Canadians to think above their situation – think Glyndebourne, think Salzburg.

His cri-de-coeur should kick-start a national and international debate. Almost every sentence could apply to English National Opera, the late New York City Opera and more.

About Opera Lyra in Ottawa: It is time to rethink.

I am sorry for what happened in Ottawa- I sang with them twice, once at the beginning of my days with Jeanette Aster in an amazing little Mozart Pasticcio at Chateau Laurier (sold out), and once just two years ago, in a semi staged Manon at the NAC singing Des Grieux (a well filled near sell out), this near their end of THEIR days. All along we were accompanied by a weird depressed general air, despite the triumph, and a shoulder shrug by so many with a feeling of “it is what it is here in Ottawa”- everyone knew change was needed and I don’t know how many whispers I heard and how many people said this to me in private. I have made a million calls behind the scenes to see what could be done, and again no calls were returned nor were ideas dared with big sponsors in mind.

Mario Bernardi built that hall for Opera it’s fantastic and yes it’s a shame what has happened!!!!

I can’t help the feeling that we must all rethink, restructure, stop feeling like it’s just a regional company, and if one is “regional”, it should be proud of its regionalism and not be apologetic- this would thus make it un regional and cool – ever been to Glyndebourne or Salzburg in say November or March? These two places only decided to become the navels of the earth from very humble beginnings by being proud of what they have to offer, and thus they made the people of the world come to see it. Ottawa can do that it its own way!

It is time to dare to be different from the old moulds that have made up Canadian arts institutions- all of us have to change, the artists, the staff, the union(s), the orchestras, the offices, and our smarts have to be sharpened of how to be better technologically to fill the seats,. This will have to also come from a thinking outside the box while more inside technology – yes, and while we need a better government structure especially in Ottawa, a bilingual jewel, we need to outsmart them too and get better donors — my heart goes out to Ottawa– everyone is struggling but some places thrive and it isn’t because they are in good old Europe ( where things are money wise not a sweet as you’d think, while audience wise, all in all, it is fantastic and new core!!)

We need another Bernardi, Bradshaw and Neef.

My comments come with respect to those who have tried and gone before, but now it’s broken and the situation needs to be fixed, redone, restructured and done so, completely differently from before!