Is this the new Europe at work?

The Santander Orchestra was launched this morning at the Krzysztof Penderecki European Centre for Music in Lusławice, southern Poland.

The conductors are Penderecki and the American, John Axelrod. Young talent is being recruited from academies across Poland. 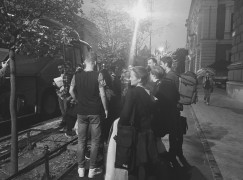