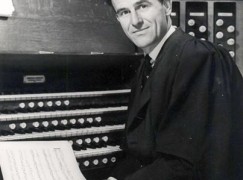 Sir David Willcocks on period instruments: ‘I sit firmly on the fence’

In a wide-ranging interview with Bruce Duffie, the choral conductor (who died last week, aged 95) was at once polite and forthright about historically informed practice.

‘Where composers have specified clearly what they want, one ought not to depart from that.  Most modern composers do specify very clearly, first of all, the tempo.  They give a broad indication, through metronome marks and that sort thing, as to what they want.  Clearly one has to adapt to a certain extent, because if you’re performing in a church with a very reverberant acoustic — perhaps an echo period of five seconds — you must perform at a more steady pace than you would if you were in a very dry acoustic.  So I always look at what the composer asked for and then think to what extent one should adapt according to the circumstances.  Where composers specify certain instruments, you ought to think twice before changing those instruments.  You certainly oughtn’t to add notes willfully, although some composers of the Baroque and Classical periods did leave a lot for the composer.  They wanted ornamentation.  They wanted a certain degree of improvisation.  So to that extent, I would depart from the printed score.

BD:    But were they not confident that the style would always be the same that had been handed down for at least the last couple of generations?

Sir David:    I think they were, and I think they’d be horrified sometimes to have heard what successive generations have made of it.  But we are making a genuine effort now to understand what musicians of that period probably would have done.  Now to answer your question more fully over the other things, I would hope that with modern composers one does keep as far as possible to the score as they’ve presented it, although music must be recreated and there must be a subjective element in the performance of music.  Nobody wants to exist for all time on a recording made by a particular person, even if it’s the composer himself.  I think music would become sterile if it weren’t constantly being reinterpreted by others.’

« In bewildered America, this fraying rocker counts as classical

A violinist who plays four instruments »