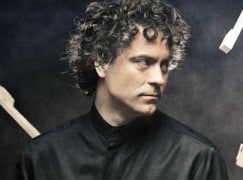 Paul Lewis, who damaged his hand in falling after an attack by seagulls outside Liverpool’s Philharmonic Hall, is in renewed distress.

Paul was due to play three dates with the Boston Symphony next month, in Boston and at Carnegie Hall. But here’s a message from his management, Ingpen & Williams, released by the BSO:

Due to undergoing emergency surgery last week, it is with enormous regret that Paul Lewis has announced his withdrawal from his performances with the Boston Symphony Orchestra and Andris Nelsons, both in Boston and on tour to New York. The medical procedure was a success, and Mr. Lewis is recovering well, but his doctors have advised him not to travel for at least 6 weeks. Mr. Lewis is so disappointed to lose what for him was one of the highlights of his current season but hopes to return to Boston again as soon as is possible.

There is no indication whether the surgery was in any way connected to his Liverpool fall. We wish Paul a speedy recovery. He will be replaced at the BSO by Lars Vogt.