We have been informed of the death in Toronto, aged 67, of Jacques Israelievitch, one of the most influential Canadian violinists of his time, or any other.

Jacques was 23 when Georg Solti named him assistant concertmaster in Chicago in 1972, the youngest player in the orchestra. He went on to serve seven years as concertmaster in St Louis and 20 at the Toronto Symphony, longer than any other occupant of that seat. In 2008, he became music director at the Koffler Centre for the Arts.

Born in Cannes, France, Jacques studied at Indiana University School of Music with Josef Gingold and Janos Starker, and chamber music with Menahem Pressler.  In Paris, he took lessons with Szeryng and Milstein. He received the French Légion d’honneur and the Order of Canada.

He died of cancer complications and will be buried on Monday. Jacques  is survived by his wife, Gabrielle;  three sons, David (of Seattle), Michael (of San Francisco) and Joshua (of Northern California);  and two grandchildren. He was delighted to know that his son Michael had just been named acting principal timpanist of the San Francisco Symphony.

Our condolences to the family. 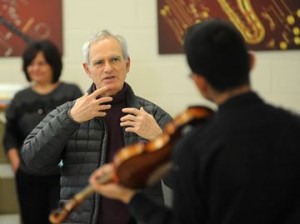 « Living next door to a singing teacher?

Key Stravinsky score, lost since 1909, has turned up in St Petersburg »