He was a fixture at Sadlers Wells in the 1950s and 1960s, often conducting Gilbert and Sullivan but even more frequently in light French opera. Alexander Faris was an authority on Jacques Offenbach and a man who never allowed himself to be troubled by the weightier aspects of music.

Away from the opera, he wrote a lot of television themes – most enduringly for the long-running serial, Upstairs Downstairs, itself a little lilt of genius. 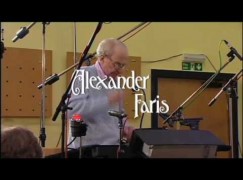