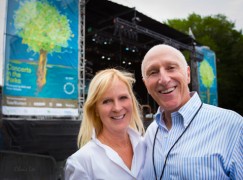 The Pope was a no-show for the season’s first symphony concert, but Oprah Winfrey and Barbra Streisand turned up on the red carpet and so did the biggest gift in 173 years of Philharmonic activity. The board chairman, Oscar Schafer, and his wife, Didi (pictured), gave $25 million.

Just like that: $20m for the endowment and $5m for free concerts in the park. Mr Schafer is a hedge fund boss.

It is the rule in US arts organisations that the chairman gives the biggest check. That’s why Carnegie Hall is burning the midnight oil to find a replacement for Ronald Perelman, who fell out with the executive director and the rest of the board and won’t be giving them another cent.

« Your weekend read: What critics want