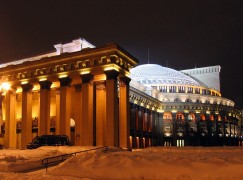 The Novosibirsk Opera and Ballet, which erased its previous chief conductor and general manager from its history after a controversial production of Wagner’s Tannhäuser, is under Putinist reconstruction.

His younger brother Dmitry, however, has now accepted.

Dmitry Jurowski, 36, is chief conductor of the Flemish Opera in Antwerp.

« The conductor with the wealthiest audience