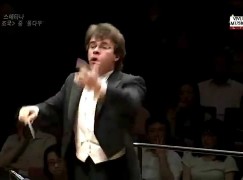 Hrůša, 34, will be the fifth chief since the orchestra was founded in 1945, made up of refugee musicians from the teutonically cleansed, soon-to-be Communist Czechoslovakia.

He says: ‘Even before I had a chance to conduct this jewel among European orchestras, I had been a huge admirer. They are an embodiment of orchestral culture, with everything imagined by this term. And with the Orchestra having its origins in Prague, we breathe the same musical air, sharing our cultural backgrounds, being artistically and historically very close. With the Bamberg Symphony, every phrase can turn to be a little miracle, and every concert is a transfiguration.’