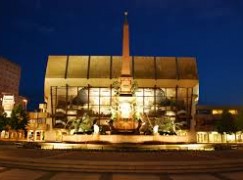 It seems extraordinary that the Leipzig Gewandhaus chose to name its next music director through the Boston Globe newspaper, several hours before it broke the news to German and European media.

We cannot recall an instance of a music director being announced in another city, let alone another continent. It makes no sense. If Nelsons is to be a lion in Leipzig, Leipzig ought to be the first to know about it.

What the media manipulation suggests in this case is two things:

– Andris Nelsons’ German-based agents were managing the deal, spinning for all they were worth to protect his Boston position, even at the expense of his new orchestra;

– Boston needed to be compensated, palliated, face-saved for giving up a chunk of their music director’s time.

Whichever way you look at it, Boston loses out and Andris has got off on the wrong foot in Leipzig.