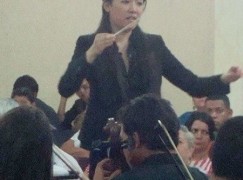 Erina Yashima, newly appointed répétiteur in Kaiserslautern, has been named Solti Conducting Apprentice with the Chicago Symphony Orchestra. She gets to spend 10 weeks a year for the next two years assisting Riccardo Muti. 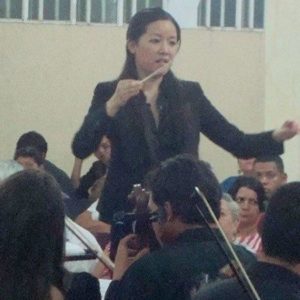 As part of the two-year conducting apprenticeship, beginning in February 2016 and continuing through January 2018, Yashima will spend at least 10 weeks a year studying and assisting Muti in Chicago during his residencies with the CSO each season. The apprenticeship also includes close work with the Civic Orchestra of Chicago, the CSO’s training orchestra for young professional musicians, including the opportunity to lead several rehearsals and a performance with the Civic Orchestra each year. The specific responsibilities included in the two-year apprenticeship are tailored to the individual who holds the position.

At the live audition that took place at Symphony Center, the finalists were required to lead the Civic Orchestra of Chicago in a rehearsal of symphonic repertoire, and also to coach soprano Laura Wilde and baritone Anthony Clark Evans, both members of the Patrick G. and Shirley W. Ryan Opera Center at Lyric Opera of Chicago in opera arias from the piano.

German-born Erina Yashima was selected in consideration of her distinctive artistic qualities displayed throughout the selection process. She was recently appointed répétiteur with conducting duties of the Pfalztheater Kaiserslautern. From 2013-2015, she was the music director of the Freies Studentenorchester Rostock. In 2013 she was given the Award of outstanding excellence by the Musikakademie Rheinsberg for the opera production she conducted there that year. Her guest conducting experiences include a collaboration with El Sistema in Venezuela, where she conducted two youth orchestras (May 2015).

The creation of the CSO International Sir Georg Solti Conducting Apprenticeship was announced by Muti in October 2009 as part of his larger vision for the CSOA. This vision  includes the opportunity to build on the CSO’s great tradition of training young musicians through the creation of an apprenticeship which fosters the talents of promising young conductors and invests in the future of the art form. The program is named for Sir Georg Solti, who served as music director of the CSO from 1969 to 1991, not only because of his deep connection with the CSO, but also in honor of his commitment to connecting with young musicians.

Earlier in their respective careers, both Sir Georg Solti and Riccardo Muti refined their musicianship through their studies and work with singers in the opera house, and Muti remains passionate about the importance of a conductor’s ability to rehearse with an artist at the piano. He regards keyboard and vocal-coaching skills as crucial in the creation of a complete musician: one who is able to stand before of an orchestra with natural authority. Muti’s sincere hope in establishing this apprenticeship was to identify the promising young conductor who will benefit most from his tutelage and the unique opportunities of working with the CSO and the Civic Orchestra of Chicago. The CSO’s International Sir Georg Solti Conducting Apprenticeship is a program of the Negaunee Music Institute at the CSO.

Funding for the Sir Georg Solti Conducting Apprenticeship is provided by a generous grant from The Claire Rosen & Samuel Edes Foundation. The Foundation’s deep commitment to education and the arts in America provides a promising young conductor the financial means to focus on their work with the Chicago Symphony Orchestra and Muti and the rare opportunities this experience provides.