In bewildered America, this fraying rocker counts as classical

At the top of this week’s classical crossover charts (Billboard) and sales (Nielsen) is this man. 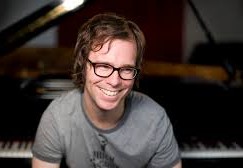 He’s called Ben Folds, he’s 49, and he was the founder of a rock group, the Ben Folds Five. Now he’s on his own.

The only reason Ben Folds counts as classical is that he employs the Nashville Symphony as backing on his new album, So There.

Quote from Mr Folds: ‘‘I Want to Piss in Your Yard With This Record’.

Confused? So are we.