Our good friend Dr Stephen Roe, former head of music manuscripts at Sotheby’s in London, was taking a family break on the Greek island of Samos when he found himself in the thick of human desperation, obliged as a decent human being to help others in need. Here are some excerpts from the diary he has been keeping this past week. Impossible not to be moved by the disaster. 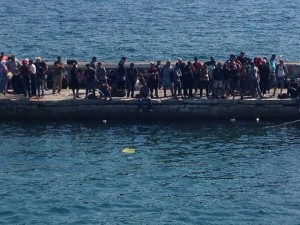 Driving towards Vathi, the capital of Samos today, we passed 30 or so refugees, men, women, young children, but probably mostly young men. They were miles from anywhere. It was 7am. Probably just arrived. Then we took boat to Turkey and saw scores of life-vests on the shores, and further up the beach. I hope they were only abandoned after the poor people thought they needed them no longer. They were in remote bays, with sole access from the sea. What is to be done?<

August 31
Refugees in Samos. Another night, more waves of refugees coming from Turkey. Many were lined up in Vathi on the quayside being processed: this means coming forward and having your details taken down by a policeman with a facemask (two cops went down with TB on Chios, so…). Outside the police station, another crowd, this time with numbers written on the backs of the hands and they are called up by number. From what I saw, the police do seem to be behaving well in a very difficult situation. On Agothonisi, population 150, 300 asylum seekers arrived one night last week. On the quayside in Samos deflated rubber boats being emptied of abandoned rucksacks, water-bottles, life-jackets. A lorry full of these is already moving off. Not all the incomers are destitute. Some stay in hotels. I don’t know what happens then. For the others, I believe the Syrians are separated and taken to Athens. In Vathi there is an internment building/camp, which I have not seen.<

They wander round like zombies out of place in this strange world where women are lying on the beach in bikinis, while their women are swaddled in black. People mostly ignore them. Some already seem to have the confidence to seem already at home; others sleep on the bare ground exhausted. Some carry black bin bags with their possessions, others have rucksacks. Some have small black carrier bags with their only possessions:wallet, passport, mobile phone. Everyone has a mobile phone. It was through this that I met Abdullah (15), who asked me where he could buy a phone charger. I took him to the shop and bought him one. He may have been able to afford it as he was staying in a hotel with his uncle. They had come over last night. They had come to escape the helicopter bombers which had killed his neighbours. He did not mention his parents.

September 5
What do you say to the youngish Syrian man in your passenger seat at 9am who has just told you that his 2 year-old child was drowned on the inflatable boat from Turkey a few hours earlier? I had found him walking along the road to Samos Town with two others who spoke better English. All had come over last night. I tried to find the words to describe the look on that man’s face. But I cannot. This is the first of four short posts I intend to make today. Someone questioned me why I am writing all this. There are two reasons: 1. I need to get it off my chest. 2. There are things I will say about the refugee situation in Samos that you will not read in the press. Please feel free to share. Thanks for your understanding.

The next three posts will deal with emotions, boats and my threatened arrest.
2. I have now met nearly 40 refugees in the last 24 hours. Today I ferried several large family groups in small sections. They were all scattered along the road between Karlovassi and Samos Town. I started only taking two or three and was a bit surprised to see 7 get out (mostly kids) when I stopped for the last time in Samos. One little girl sang all the way in a lovely voice. My small boot was filled with rucksacks, sometimes rather soggy. The majority are young men. Most are students, including three of English in Damascus and Latakia. They were all extremely polite and VERY friendly.

They are all dead-tired after being up all night from the boat from Izmir, not having slept for days, being mistreated in Turkey, an ordeal lasting several days, and from the general fears and difficulties of escape from Syria, some via Lebanon. Some told me of their onward journey with the happy thoughts of going through Serbia, Hungary, etc. Underneath all this there is a silent, suppressed euphoria. In one case, this was unsuppressed: Osama from Latakia simply could not stop talking, thanking God for being where he now was. He asked me if I believed in God, and I said that we would have to disagree on that issue. He took it in his stride. One young guy this morning did not know where he was. He kept asking if this was Greece (Yunan, is Arabic for Greece I now realise). He kept repeating that word as if to ram the fact home. One guy had an invitation from Bayern Munich to possibly train there. No one said they wanted to go to England specifically, Germany being the place. Several invited me one day to Syria. So Mr Farage and co, from whom I have been carefully shielded these last weeks, need not lose any more sleep.

3. The boat. After my ferrying, I stopped for a swim at one of the great beaches on the northern shore. Picking my way through the stark naked elderly Germans, as you do, I spotted what had once been a boat by the rocks, under the white cliff. It was an abandoned grey,rubber inflatable. It did not resemble a vessel any more, folded and smashed as it was, and it could never be used as one again.The floor had become vertical. It was of a thickish plywood. There were five large black and orange flotation or buoyancy rings still inflated, with a number of abandoned red life-vests. There were odd bits of clothing: a tee-shirt, a pair of jeans, a single white trainer, and a lot of other unrecognisable bits and pieces. Oh, a cardboard cup marked “cold drink”. It would have been unseemly to sift, rather like disturbing an archaeological dig, or a grave. It was the sort of boat that Mohammed and his friends came over in last night. 40 souls packed in, abandoned by their traffickers to find their own way to Greece, in the dark and at the mercy of the wind and waves. It wasn’t too bad last night. The meltemi was not blowing and the waves not so high. But for one poor father at least, that crossing would be seared into his mind indelibly.

4. Arresting tales. Once landed after the 6 hour sea-journey from Izmir, the refugees scramble up the slopes/cliffs and make it onto the main road which runs from Karlovassi to Samos town. It is a fast road, by Samos standards, and they are obliged to walk the 12 or 15 km on the hilly, winding road to reach the centres where they are registered etc. I have been ferrying them along the road to the police station in Samos. When I emptied the car of 2 guys, 1 woman and four children, including the lovely singing infant mentioned before, an oldish guy, who evidently was a policemen told me roughly: You should not be doing this. It is against the law, I should arrest you now. You can be arrested as a people-trafficker. It is OK carrying old women and children, but the young guys, no. They are dangerous, they have knives, not long knives, but knives. Very few of them are Syrians. They are Iraqis and they will kill you. I am telling you for your own good”. I was a little taken aback by this news and the way it was delivered, and I needed the swim and to write all this down to try to make sense of it.

I understand that there was a law in Greece against offering “illegal hospitality” to refugees, in an effort to stamp out trafficking. But that this has recently been repealed (I should be grateful if anyone could confirm this), although this policeman did not seem to have heard that bit. Also, because of this law, Samosians are reluctant to pick up the refugees. There was no one but me today; one German lady yesterday. If there is such a law, why are women and children exempt, or at least exempted by the policeman? Next, apart from 3 Kurds, all the people I have collected have been Syrians, people who have just got off the boat exhausted, the last sort of people who I imagine/ hope would want to pull a knife, even a very small knife, on someone who has stopped to help them. So, if I am arrested, you can all be my witnesses that I am not a people trafficker, and illegal hospitality is not my game. But I shall take my passport with me down to the road tomorrow just in case.

September 6
This is only going to be a brief update.
1.There were no refugees to ferry this morning, perhaps even the traffickers have a day of rest.
2. In Samos town itself, there were fewer refugees. Apparently, a big ship arrived yesterday to take off as many as possible to Athens. I hope it was the big ship passing Agios Konstantinos with all lights blazing at 8pm last night.
3. The body of the baby was found yesterday. It must have been lost only a couple of hours before I ferried the father to Samos town. His look of immeasurable, frozen torment haunts me.
4. Another image: in Samos just now, sitting on the wall by the police station, a man, my age, crying alone. I tried to help, but could not. I think he had lost his family. Maybe there are on the way to Athens. I suppose all catastrophes are made up of such micro-tragedies. Another haunting image.
5. Finally, all of this goes on against the counterpoint of the most hauntingly beautiful place I have ever been to.

« Some more advice on how we want you to perform

How do you bow a Mahler symphony, left or right? »