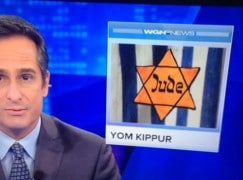 Dumbest news pic of the decade

Sending a message of good wishes to Jewish viewers for the fast of Yom Kippur this week, Chicago station WGNNews posted this image behind the newsreader.

It’s the badge that Jews were forced to wear in Nazi Germany and German-occupied countries, prior to their deportation to the death camps.

The station said later it ‘failed to recognize that the image was an offensive Nazi symbol.’

Do be careful where you get your news.

Here’s an apology from the station’s general manager and news director. They don’t seem much the wiser.