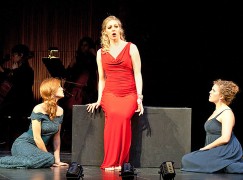 In this year’s four specialities, a Brit won the trombone prize, a Swiss the flute and a Russian pair the piano duo.

Emalie has been part of the Met’s development programme and has been working of late at the Salzburg Landestheater. By winning the ARD, she gets her break on the international stage. Book that name.

« You won’t hear finer Brahms than this…

The conductor with the wealthiest audience »