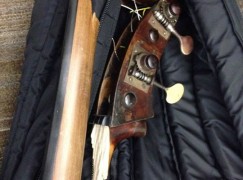 Outrage as a second doublebass is destroyed in Atlanta

Last week, Karl Fenner had his instrument smashed at the airport in Atlanta, Georgia, just after he won an audition to play in the ASO.

Now we hear from Milton Masciadri, a teacher at the University of Georgia, that his doublebass has suffered the same horrible fate. Milton’s bass is, we hear, a beautiful Tessore.

Milton writes: ‘In my case they failed to put the restraining belt on the neck of the bass after inspection. This is the second instrument broken in three days….’

Someone needs to get a grip at the TSA. Meantime, don’t fly an instrument to Atlanta.