Statement from the choir of Kings:

It is with great sadness that we learned this morning of the death of Sir David Willcocks. Sir David died peacefully at home this morning, 17 September, aged 95.

Sir David’s connection with King’s began as an Organ Scholar in 1939; he was elected to a Fellowship in 1947 and subsequently held the post of Director of Music from 1957 to 1974. 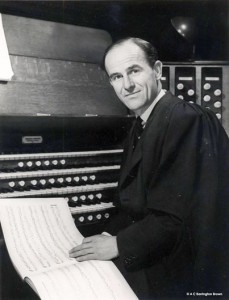 Performing on his International Touring Organ, Carpenter played to a large crowd on the steps of the Konzerthaus in the afternoon sunshine. Fans and onlookers were invited to contribute donations so as to enable “Moabit Hilft” to continue their tremendous support of hundreds of refugees in Berlin.

The concept for this charity performance was sparked by an appeal from Iván Fischer – the chief conductor of Konzerthausorchester Berlin and music director of Budapest Festival Orchestra – during the season opening at the Konzerthaus, where he called for tolerance and generosity towards refugees from the people of Europe.

Carpenter posted on his Facebook page after the September 4th concert: “RIGHT ON, MAESTRO: I’m so glad I didn’t miss Iván Fischer’s timely message (auf Deutsch) from the stage of the Konzerthaus Berlin two nights ago. The essence: that music, as a humanism, “has its part to play” in opening the doors and hearts of the world, and particularly of Western Europe at this moment.” 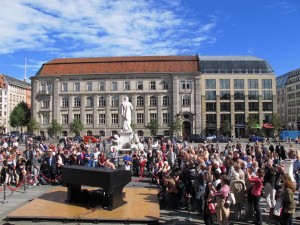 The Wall Street Journal reports a breakdown of relations at Carnegie Hall between the new chairman, Ronald Perelman, and the English executive director, Sir Clive Gillinson.

Perelman accuses Gillinson of failing to obtain board approval for major deals, such as a branded competition funded by Warner’s Len Blavatnik. For a period of 24 hours last month, Gillinson was suspended from his job.

This is not over yet. Read here.

UPDATE: Perelman quits, but it’s still not over.

Karl Fenner was exultant. He had won the doublebass audition at the Atlanta Symphony Orchestra.

Then he handed his precious instrument to TSA for transportation on SouthWest Airlines. 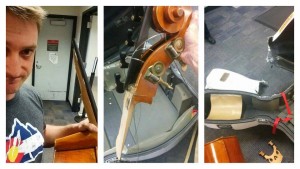 Karl writes: ‘Thanks Southwest Airlines and or TSA Atlanta. I’ve trusted you with my baby for 9 years and then this. The heavy duty case was heavily damaged too.’

His friend Sasha Mäkila adds: ‘Heart breaking to see musician’s livelihood hanging on a thread every time they board a plane with their instrument.’

Ivan Fischer has spoken out in Berlin against his government’s treatment of the refugee crisis at its borders. Now he has organised an aid convoy. He spoke yesterday in Budapest (in Hungarian, followed by English) about the mission, and other Hungarians who are helping. ‘They saved the conscience of this country,’ he says. 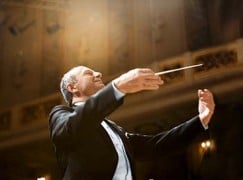 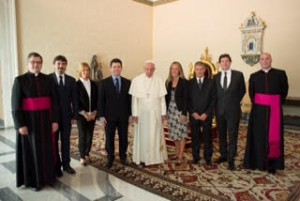 His Holiness with DG team presenting the Sistine Chapel recording. 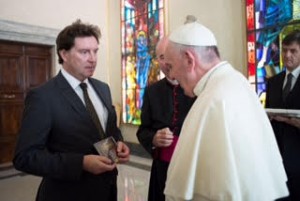 Pope Francis checks the credits on the DG cover. Mark Wilkinson, former head of DG, struggles with the cellophane.

It’s the controversial Anne-Akiko Meyers, and she steers carefully clear of controversy in this friendly interview with Zsolt Bognar for Living the Classical Life.

But the confession (play 12:00) that she absorbs music best while running errands in her car is one that we hear quite often.

Is that what other soloists do – working out an interpretation while searching for a parking spot? 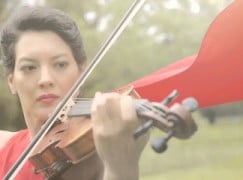 A date has been set next Tuesday for the city to affix a plaque on the house where Henri Dutilleux lived and composed for many ears. The local authorities had initially refused to agree to the plaque after endorsing false claims that Dutilleux had been a wartime collaborator. 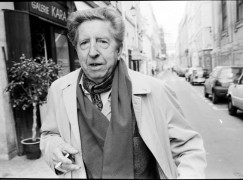