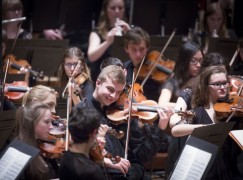 The orchestra that sings as it plays

The National Youth Orchestra were breath-taking at the BBC Proms tonight.

In the London premiere of Re-greening by Tansy Davies, a piece the composer says is made up of recycled materials, the 165 teenagers dispensed with the need for conductor, following their 16 year-old leader in the complexities of a contemporary piece. Twice, the strings continued playing as they sang two ancient English songs, one of them the oldest of all, Sumer is icumen in. The rest of the orchestra softly and magically chimed in.

Mahler’s 9th symphony, conducted by Sir Mark Elder, was remarkable for clarity of texture and depth of feeling. Elder did not challenge the teens to take the risks he might demand from an adult orchestra, but the effort was intense, many playing literally on the edge of their seats while still finding time to exchange smiles with their stand partners.Principal viola, cello, flute and trumpet were outstanding. In the finale, the jagged descent to total silence was brilliantly achieved. Several cheeks were streaked with tears.

Do not miss the BBC TV broadcast on Sunday week, and do try to catch the NYO in Berlin this week.

Death of an international opera director »