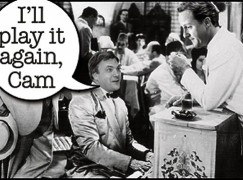 The newspaper that hid a string quartet

The late quartets of Ludwig Van Beethoven are said to have received their London premieres at the home of a print manager of the Times newspaper.

Now we read that the Financial Times has secretly harboured a string quartet below decks.

Its existence is revealed in the new issue of Gramophone magazine by former journalist and Labour would-be Chancellor, Ed Balls, who used to play violin in the group. Two other members were Gillian Tett, now the FT’s US managing editor, and John Happer, associate editor. The fourth player is unnamed.

Come on out, we know you’re there….

And don’t expect the FT’s new Japanese owners to give you time to practise.