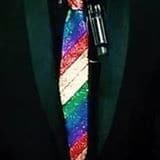 I was in the middle of a show at the Opera House and myself and all of his colleagues were incredibly proud of him and were running offstage when we could to try to catch a glimpse of him televised live on Channel 9. I had friends poised to tape it in case I missed it, and his family were set to travel from the country to watch him perform.

He nailed the anthem. He looked fantastic. He also wore a snazzy rainbow tie to show his support for marriage equality, an issue on which the government of this country is embarrassingly backward. He finished and stepped back to rousing applause. The applause died down and a solitary, angry male voice in the crowd yelled ‘Faggot!’.

I am beyond stunned by this. Beyond hurt and beyond angry. He took it in his stride, texting me that it had happened and adding ‘My work here is done.’. I found myself unable to accept it with such grace, and then found myself wondering why this was so. The sad conclusion I have reached is that he can accept it because it happens to him every day. Every. Day. Stop to consider that – imagine that every time you leave the house, you’re resigned to the fact that you’ll cop abuse from complete strangers. That you could be standing in a silence in front of 15 000 people – the most vulnerable a performer will ever be – and be shot down by a pathetic, cowardly word. I sometimes see it: When we’re walking down the street and a stranger sneers “Nice pants”, or when he’s riding on the train with our son and an ignorant bigot yells out “Oh, look – the poofter’s got a baby!” I’m outraged every time and can’t believe that this is 2015 Australia. He shrugs it off and occasionally tells me if there’s a really bad event. I find this sadder than the abuse itself. That people are walking around every day expecting to be abused. Resigned to it. USED to it. This appalls me beyond words.